As some of you may have seen i was invited to help out with a new documentary airing this Wednesday (12th Dec) on BBC1 at 8pm. I hope you will all be tuning in to learn about the importance of Britain’s tiniest inhabitants!! Here I’m going to talk to you about my favorite – Plankton!

Plankton is the name given to any organism in the ocean that is unable to swim against a current. That doesn’t mean that if you get caught in a rip tide you belong to the plankton, but it does mean that it is filled with a diversity of different organisms spanning from single celled algae to larval octopus.In the show we looked at two main divisions of plankton; the phytoplankton and the zooplankton. The name phytoplankton is given to plankton which are capable of harvesting the suns energy in a process called photosynthesis. While zooplankton is the collective term used for all the other species which form the plankton. 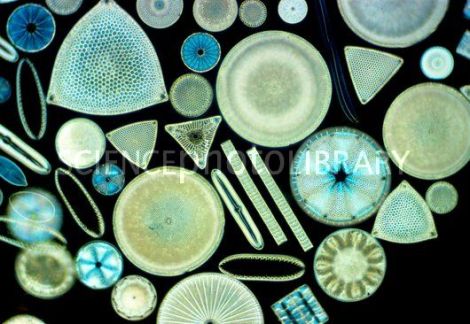 Phytoplankton are one of the most important organisms on this planet. Their ability to utilise the sun’s rays means they are fundamental in the earth’s global productivity and produce nearly 50% of the global oxygen as a by-product. Phytoplankton are single celled algae not dissimilar to our terrestrial plants. They harbor chlorophyll and this is the main apparatus for photosynthesis. Because they photosynthesise, phytoplankton are fundamental in our battle against climate change.Photosynthesis uses carbon dioxide and water and transforms it in to carbohydrates and oxygen. Therefore they are mopping up the carbon dioxide we emit in to the atmosphere and when they die they transport this sequestered carbon to the bottom of the ocean. 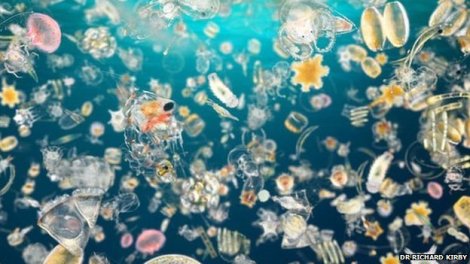 Zooplankton can be sub divided in to many groups based on size. However they are formed of a huge diversity of organisms, most of which feed on phytoplankton to survive. We can begin to see how these organisms are linked in to bigger food webs. Zooplankton eat the phytoplankton, fish eat the zooplankton and we eat the fish. Other animals also come in to this food web, the main diet of the biggest mammal on earth, the blue whale, is plankton and small crustaceans called krill, which narrowly miss out on the term ‘plankton’ with the ability to actively swim against a current. 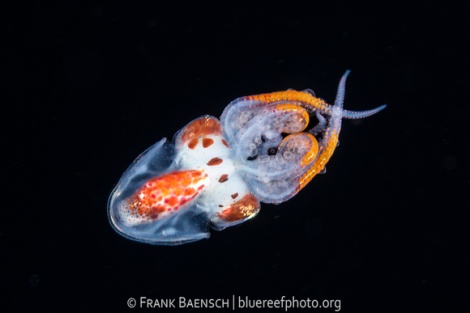 So we can see how fundamental plankton is in feeding the world! The zooplankton also contains a number of larval organisms, from fish, eels, and octopus which grow up to become much larger members of our oceans. Therefore organisms can be just temporary members of the plankton, later on growing up to become part of the nekton, the term used for organisms which can swim against a current.

Apart from being fundamental to life on earth, plankton are also incredibly beautiful, intricately detailed like a snowflake. In this post are some incredible images of some of the organisms that form the plankton, and I hope this has inspired you to think twice about the small and seemingly insignificant. i leave you with this…. The Secret Life of Plankton.