So it has come to the end of week one here in Puerto Morelos, a week of long nights and lots of data analysis. The week began with an introduction to the light environment and practical instructions as to how irradiance and radiance detectors work. This I found very beneficial as light sensors are very important in the marine line of work and I have frequently used 4π and cosine sensors myself without really knowing how they work. Well all that has changed now and I fully (well competently) understand the functioning and process. Mid week we performed some field measurements including a depth profile from a boat of the light environment over the reef flat, and various measurements from the pier including comparisons of reflectance from sand, seagrass and the sea surface. So I got my first glimpse at the reef, which was mainly dominated by gorgonians and a few massive boulder porites species, I also got very burnt, which is a hazard of the job! What was even worse was that in my attempt to sun cream up my own back, I inadvertently missed a few hand shaped patches and now have a butterfly design tan on my back!!!

I also have a new lesson for you, I think my blogs are becoming quite informative! Before I explained why the sky is blue and sunsets red! Now I will explain why wet sand is darker than dry sand. When you think about it you would think that really water is more reflective so should really be brighter! However as we know wet sand is significantly darker! Well I have you know that water makes light penetrate deeper in to the sand and collides more frequently causing more energy loses before the light exits the sand, causing it to appear at a lower light intensity to the surrounding sand where light penetrates less deeply and so suffers less losses! This is similar to the effect on a freshly pulled pint of beer! The head is white, this is because it is aerated and the light reflects more quickly where as the beer is in liquid and so the light penetrates deeper and loses more light!

Towards the end of the week we looked at reflectance, scattering and absorption of the coral skeleton, solid and powdered materials and artificial coral skeletons made with ridges in acrylic. This showed how coral skeletons can increase light intensity via reflectance. This was followed by a spectroscopy lab where we compared different methods for measuring absorption of chlorophyll and gave us some good practical instructions as to how different methods work and how to interpret the results. The last day we looked at modeling the light environment using different models. We got to choose quite an interesting question for one, which involved deep sea fishes. Basically we wanted to model how much light a fish eye will see at 1000m’s depth which we managed to do without ever touching the water. I actually found that models may be better in some cases as in the field waves and environmental factors can introduce large variability, where with a model you can measure real parameters and calculate a more accurate description of the light environment using physics.

Now for the weekend, hooray, until we realize we have an exam Monday morning and must attend revision classes on Sunday and then sit the exam first thing Monday morning. There goes my weekend! However I was darned to get the most out of it and excited that we had a diving trip planned for Saturday. However luck was not on my side and when Saturday came so did severe weather warnings and diving was called off! So instead I fell upon my second favorite past time and went shopping instead! So Saturday was filled with tourist-tastic activities in Cancun followed by a bbq on our roof terrace with lots of food and margaritas! At last an easy day! Sunday was cloudy but I took a walk along the beach and got some great photos all of which involving seagulls surprisingly. The first was very interesting all the gulls were lined up identically along these beach umbrellas, the second was of this little girl surrounded by gulls. She was throwing bread in to the air and the gulls were hovering above her and swooping in to catch the bread mid air it was very funny, I’m glad I captured the moment although I with I had a clear background instead of Americans sunning themselves! I also got a nice photo of a coconut in the sea, it reminded me of the film castaway with tom hanks and his best buddy Wilson! One other thing I noticed was the amount of weddings on the beach! Now many might think, ahhh how romantic getting married on the beach, and I would agree, however I do not see how people want to get married right next to sun beds of other holiday makers with everyone peering in, how intrusive, not my cup of tea! 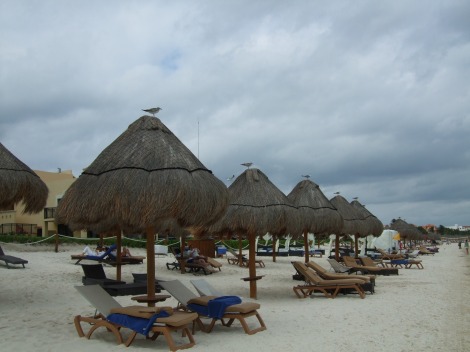 And so I come to the end of week one, feels more like a month but I am defiantly expanding my knowledge and skills substantially and looking forward to more photobiology and less physics next week.